Inspired by the Pandora brochure "How to tie the knot", the maritime atmosphere on the island where I just spent a three week vacation, and the patch of German clovers that still grew there...

You need: two Pandora textile bands, a Pandora stopper and 5-7 silvers, preferrably identical ones which can sit crosswise to the usual direction on the bracelet.

Thread both bands through the first bead and pull through until bead sits roughly in the middle. Now take the slightly longer end (both ends) and thread through the first bead again *from the opposite direction* (a little like a shoe lace), creating a small loop. Both ends (four strands) should now have the same length and bead sits at a right angle to usual direction.

Tie a plain knot ("half hitch" in maritime terms) over all four strands.

Continue with next bead: One end (both strands) go through the bead from the right, the other from the left (a bit like the shoe lace), then a half hitch securing all four strands. And so on, until last bead is on.

To tie bracelet around wrist, pull ends through loop and fix it making two half hitches on the standing part, then secure the loose ends with the Pandora stopper.

As you can see, I did it in a rather slipshod way - the ends aren't equal length. But as long as the ends aren't too long and there's no danger of the ends going through the stopper one by one (a single strand might slip through), and I don't run the danger of meeting a mariner who would tell me off for such sloppy seamanship, I think I will just leave it this way!

You have 7 German Clovers

Lucky, lucky you, they are such beautiful beads!!!!

I love it Snork, love the colour of the string too!

Beautiful Snork, must try this with my TS silks.

Are those all your clovers or are those just the ones that grew on that island?

It looks amazing! I think I must read that description again in a quiet minute 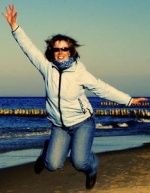 Molamola wrote:Beautiful Snork, must try this with my TS silks.

The TS silk is much smoother than the Pandora textile cord, hope it doesn't slip too much... It will of course work with any length of string, but the ends need to be capped to prevent them from slipping through the stopper. Or one might tie a stopper knot in them.

flowertroll wrote:Are those all your clovers or are those just the ones that grew on that island?

Oh dear, she found me out!

Love it, it's really different!

and so many lovely clovers 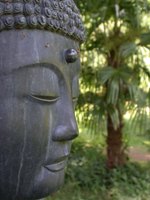 Love the grey cord and the way you have used it with all your clovers!

It is absolutely stunning. Clever of Pandora and brilliant of you to create such as superb version.

What a wonderful idea! The bracelet looks great. I will definitely have to try that.

this is so beautiful. I want to try this myself. time to play

wow! I will have to read intructions again sometime on how to do this but it looks fabulous! And so amazing to have so many clovers, a bead that is def on my wishlist! 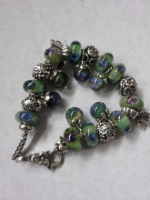 This is so lacey and delicate looking, very pretty indeed!

Beautiful bracelet and collection of clovers!!! And thank you for posting the instructions too!

SnorkMaiden wrote:
and I don't run the danger of meeting a mariner who would tell me off for such sloppy seamanship, I think I will just leave it this way!

Seriously though, I LOVE this look. Do you wear it on it's own, or with a stack of other bracelets? 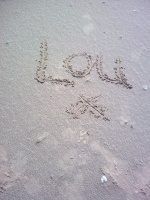 Your charming bravelet takes me back to my Girl Scout days, a very happy time.